Summer Activities
Students should read the list with their parents/carers, and select two activities they would like to do. Forms will be available in school and online for them to indicate their choices and return to school. Before choices are finalised, parents/carers will be asked to sign to confirm their child’s choices. 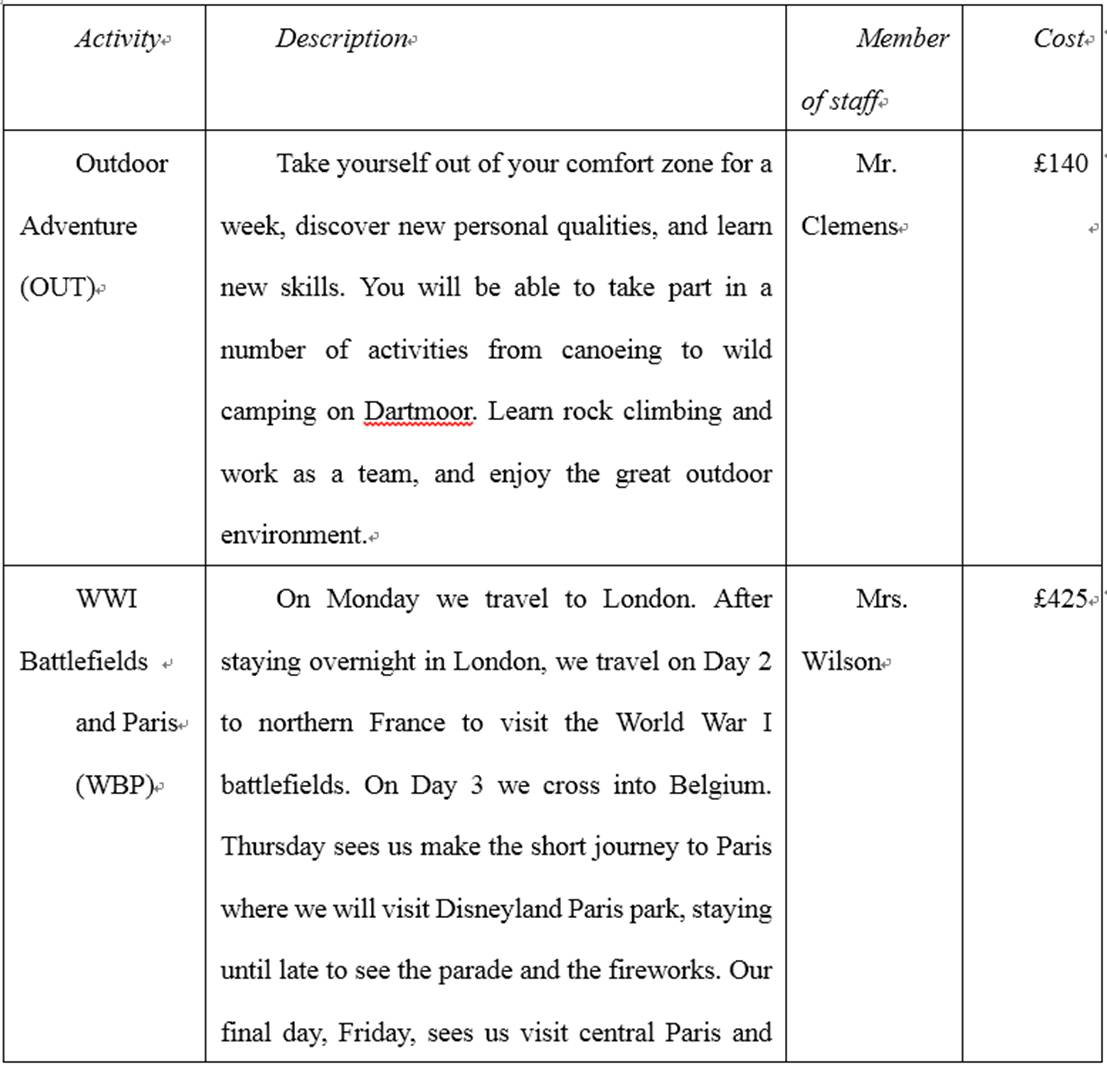 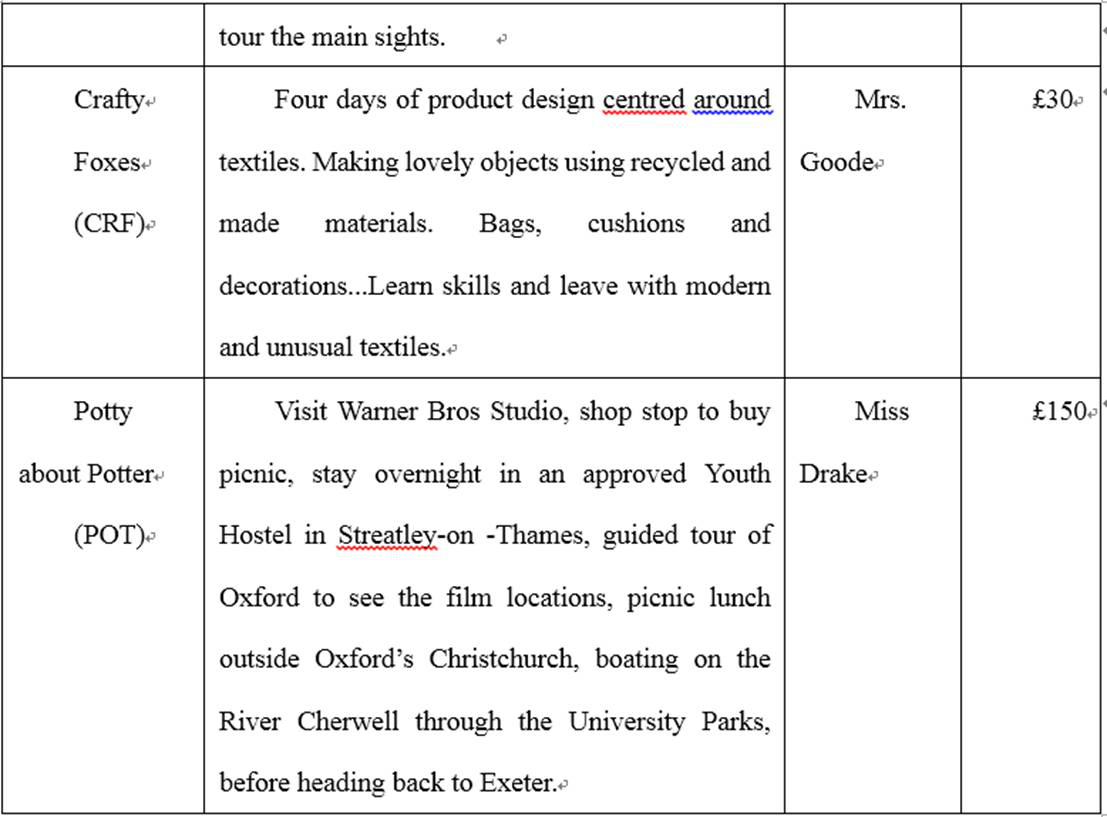 22. What will the students do on Tuesday with Mrs. Wilson?
A. Travel to London.
B. See a parade and fireworks.
C. Tour central Paris.
D. Visit the WWI battlefields.

Many of us love July because it’s the month when nature’s berries and stone fruits are in abundance. These colourful and sweet jewels from British Columbia’s fields are little powerhouses of nutritional protection.
Of the common berries, strawberries are highest in vitamin C, although, because of their seeds, raspberries contain a little more protein(蛋白质), iron and zinc (not that fruits have much protein). Blueberries are particularly high in antioxidants(抗氧化物质). The yellow and orange stone fruits such as peaches are high in the carotenoids we turn into vitamin A and which are antioxidants. As for cherries(樱桃), they are so delicious who cares? However, they are rich in vitamin C.
When combined with berries of slices of other fruits, frozen bananas make an excellent base for thick, cooling fruit shakes and low fat ＂ice cream＂. For this purpose, select ripe bananas for freezing as they are much sweeter. Remove the skin and place them in plastic bags or containers and freeze. If you like, a squeeze of fresh lemon juice on the bananas will prevent them turning brown. Frozen bananas will last several weeks, depending on their ripeness and the temperature of the freezer.
If you have ____, you can simply feed in frozen bananas and some berries or sliced fruit. Out comes a
＂soft-serve＂ creamy dessert, to be eaten right away. This makes a fun activity for a children’s party; they love feeding the fruit and frozen bananas into the top of the machine and watching the ice cream come out below.

24. What does the author seem to like about cherries?
A. They contain protein.
B. They are high in vitamin A.
C. They have a pleasant taste.
D. They are rich in antioxidants.

25. Why is fresh lemon juice used in freezing bananas?
A. To make them smell better.
B. To keep their colour.
C. To speed up their ripening.
D. To improve their nutrition.

27. From which is the text probably taken?
A. A biology textbook.
B. A health magazine.
C. A research paper.
D. A travel brochure.

Teens and younger children are reading a lot less for fun, according to a Common Sense Media report published Monday.
While the decline over the past decade is steep for teen readers, some data in the report shows that reading remains a big part of many children’s lives, and indicates how parents might help encourage more reading.
According to the report’s key findings, ＂the proportion(比例) who say they ‘hardly ever’ read for fun has gone from 8 percent of 13-year-olds and 9 percent of 17-year-olds in 1984 to 22 percent and 27 percent respectively today.＂
The report data shows that pleasure reading levels for younger children, ages 2—8, remain largely the same. But the amount of time spent in reading each session has declined, from closer to an hour or more to closer to a half hour per session.
When it comes to technology and reading, the report does little to counsel(建议) parents looking for data about the effect of e-readers and tablets on reading. It does point out that many parents still limit electronic reading, mainly due to concerns about increased screen time.
The most hopeful data shared in the report shows clear evidence of parents serving as examples and important guides for their kids when it comes to reading. Data shows that kids and teens who do read frequently, compared to infrequent readers, have more books in the home, more books purchased for them, parents who read more often, and parents who set aside time for them to read.
As the end of school approaches, and school vacation reading lists loom(逼近) ahead, parents might take this chance to step in and make their own summer reading list and plan a family trip to the library or bookstore.

30. Why do many parents limit electronic reading?
A. E-books are of poor quality.
B. It could be a waste of time.
C. It may harm children’s health.
D. E-readers are expensive.

31. How should parents encourage their children to read more?
A. Act as role models for them.
B. Ask them to write book reports.
C. Set up reading groups for them.
D. Talk with their reading class teachers.

We’ve all been there: in a lift, in line at the bank or on an airplane, surrounded by people who are, like us, deeply focused on their smartphones or, worse, struggling with the uncomfortable silence.
What’s the problem? It’s possible that we all have compromised conversational intelligence. It’s more likely that none of us start a conversation because it’s awkward and challenging, or we think it’s annoying and unnecessary. But the next time you find yourself among strangers, consider that small talk is worth the trouble. Experts say it’s an invaluable social practice that results in big benefits.
Dismissing small talk as unimportant is easy, but we can’t forget that deep relationships wouldn’t even exist if it weren’t for casual conversation. Small talk is the grease(润滑剂) for social communication, says Bernardo Carducci, director of the Shyness Research Institute at Indiana University Southeast. ＂Almost every great love story and each big business deal begins with small talk,＂ he explains. ＂The key to successful small talk is learning how to connect with others, not just communicate with them.＂
In a 2014 study, Elizabeth Dunn, associate professor of psychology at UBC, invited people on their way into a coffee shop. One group was asked to seek out an interaction(互动) with its waiter; the other, to speak only when necessary. The results showed that those who chatted with their server reported significantly higher positive feelings and a better coffee shop experience. ＂It’s not that talking to the waiter is better than talking to your husband,＂ says Dunn. ＂But interactions with peripheral(边缘的) members of our social network matter for our well-being also.＂
Dunn believes that people who reach out to strangers feel a significantly greater sense of belonging, a bond with others. Carducci believes developing such a sense of belonging starts with small talk. ＂Small talk is the basis of good manners,＂he says.

32. What phenomenon is described in the first paragraph?
A. Addiction to smartphones.
B. Inappropriate behaviours in public places.
C. Absence of communication between strangers.
D. Impatience with slow service.

33. What is important for successful small talk according to Carducci?
A. Showing good manners.
B. Relating to other people.
C. Focusing on a topic.
D. Making business deals.

34. What does the coffee-shop study suggest about small talk?
A. It improves family relationships.
B. It raises people’s confidence.
C. It matters as much as a formal talk.
D. It makes people feel good.

35. What is the best title for the text?
A. Conversation Counts
B. Ways of Making Small Talk
C. Benefits of Small Talk
D. Uncomfortable Silence

If you are already making the time to exercise, it is good indeed! With such busy lives, it can be hard to try and find the time to work out. ____ Working out in the morning provides additional benefits beyond being physically fit.
Your productivity is improved. Exercising makes you more awake and ready to handle whatever is ahead of you for the day. ____
Your metabolism(新陈代谢) gets a head start. ____ If you work out in the mornings, then you will be getting the calorie(卡路里) burning benefits for the whole day, not in your sleep.
____ Studies found that people who woke up early for exercise slept better than those who exercised in the evening. Exercise energizes you, so it is more difficult to relax and have a peaceful sleep when you are very excited.
____ If you work out bright and early in the morning, you will be more likely to stick to healthy food choices throughout the day. Who would want to ruin their good workout by eating junk food? You will want to continue to focus on positive choices.
There are a lot of benefits to working out, especially in the mornings. Set your alarm clock an hour early and push yourself to work out! You will feel energized all day long.

A. You will stick to your diet.
B. Your quality of sleep improves.
C. You prefer healthy food to fast food.
D. There is no reason you should exercise in the morning.
E. You can keep your head clear for 4-10 hours after exercise.
F. After you exercise, you continue to burn calories throughout the day.
G. If you are planning to do exercise regularly, or you’re doing it now, then listen up!

Two weeks earlier, my son, Ben, had got in touch. He’d moved to England with his mum when he was three and it had been 13 years since I’d ____ seen him. So imagine my ____ when he emailed me saying he wanted to come to visit me.
I was ____! I arrived early at Byron Bay where we were supposed to ____. The bay was ____ in sunshine, and there was a group of kayakers around 150m off the shore. Getting a little ____, I realized one kayak（皮划艇） was in ____. ＂Something’s not ____!＂ I took off my T-shirt and ____ into the water. I saw there were two instructors on board and a man lying across the middle. He was ____ violently. Linking arms with one of the instructors. I helped ____ the young man out of the water. He was unconscious and as I looked at his face, something ____ to me. Those brown eyes were very ____. ＂What’s his name?＂ I asked the instructor. ＂Ben,＂ he replied, and immediately I ____. That stranger was my son!
The instructors called for an ambulance. ____, after a brief stay in hospital, Ben was well enough to be allowed to ____ and later the family met up for dinner. We chatted about everything and then Ben ____ to me. ＂I just want to say thank you,＂ he said. ＂You ____ my life!＂
I still can’t believe what a ____ it was. I’m just so glad I was there ____ to help my son.

Diets have changed in China — and so too has its top crop. Since 2011, the country ____（grow）more corn than rice. Corn production has jumped nearly 125 percent over ____ past 25 years, while rice has increased only 7 percent.
A taste for meat is ____ (actual) behind the change: An important part of its corn is used to feed chickens, pigs, and cattle. Another reason for corn’s rise: The government encourages farmers to grow corn instead of rice
____(improve) water quality. Corn uses less water ____ rice and creates less fertilizer(化肥) runoff. This switch has decreased ____ (pollute) in the country’s major lakes and reservoirs and made drinking water safer for people.
According to the World Bank, China accounts for about 30 percent of total ____(globe) fertilizer consumption. The Chinese Ministry of Agriculture finds that between 2005 — when the government ____(start) a soil-testing program ____ gives specific fertilizer recommendations to farmers — and 2011, fertilizer use dropped by 7.7 million tons. That prevented the emission(排放) of 51.8 million tons of carbon dioxide. China’s approach to protecting its environment while ____(feed) its citizens ＂offers useful lessons for agriculture and food policymakers worldwide.＂ says the bank’s Juergen Voegele.

When I was little, Friday’s night was our family game night. After supper, we would play card games of all sort in the sitting room. As the kid, I loved to watch cartoons, but no matter how many times I asked to watching them, my parents would not to let me. They would say to us that playing card games would help my brain. Still I unwilling to play the games for them sometimes. I didn’t realize how right my parents are until I entered high school. The games my parents taught me where I was a child turned out to be very useful later in my life.